The weekend before last, I saw Werner Herzog’s Cave of Forgotten Dreams, a film about the Chauvet Cave which houses the oldest known paintings in the world. It’s a fascinating, though quirky documentary. The lingering shots of the cave, its paintings, and artifacts are beautiful and compelling, particularly because the cave cannot be entered by members of the public. On the other hand, the narration and interviews are (unintentionally) funny, thanks to Werner Herzog’s undoubtedly unique perspective on art and history. But in general, the movie demonstrates a great amount of technical filmmaking skill and great care in sharing important evidence of humanity’s past.

Except for one scene that’s been nagging me seeing the movie almost two weeks ago.

In a scene relatively early in the film, the camera turns to one of the visitors to the cave, Jean Clottes, who says, “Silence please. We’re going to listen to the cave and—perhaps—we can even hear our own heartbeats.” Then the crew of filmmakers and scientists visiting the cave become quiet, while the camera remains pointed at the people standing silently in the dark. Then, slowly, the sound of a heartbeat is played at increasing volume.

You can get a taste for that scene in the film’s trailer (starting at approximately 1:40):

Unfortunately, the scene is something of an object lesson in completely failing to be aware of the context in which the audience will experience the work. The scene becomes an apparently unintentional filmic version of John Cage’s 4′33″, reminding the audience of the context in which they’re seeing the film, rather than the prehistoric volume of the cave. It’s as if the filmmaker hadn’t been to a movie theater recently. Instead of (not) hearing the cave, the audience hears the whirring and clicking of the projector, the shuffling of audience members’ feet, and the chewing of popcorn. In other words, it calls attention to distractions from the movie.

And while I was thinking about all those distractions in the theater, I got to thinking about how the scene is just as good a lesson for the written word as it is for film. For example, it’s a rather common practice on blogs and news sites to provide a bunch of links to share the current page on Facebook, Twitter, and elsewhere and to see the peanut gallery’s comments. This is how the New York Times does it: 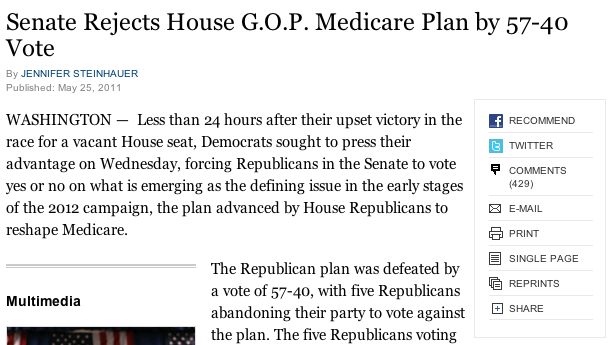 I’d characterize this as an anti-pattern. It’s more or less an invitation to embrace the distraction of, well, everything else on the web. Though I may end up tweeting a link to the page or plugging it on my Facebook wall, it’s also quite likely that I won’t return to the page I just shared. Presumably the Times thinks the rest of the article would benefit its audience (or else they wouldn’t have published it, I hope), but why offer a point of exit at the top of the article? It’s a bit like turning down the signal so I can hear the noise.

I don’t reject the benefits of Twitter and Facebook, but I recognize their capacity to draw me away from things. I’d think nothing of it to find those widgets at the end of the article, but elsewhere they exaggerate the range of possible distractions. The next time you’re writing some docs, designing a layout, planning a project, or, yes, making a film, consider the distractions your audience will face. Don’t emphasize distractions and annoyances, minimize them.